#RIPPEDFamily, you have been asking for this for years now and it’s finally here! You can now stream and download your favorite R.I.P.P.E.D. original songs whenever you want, wherever you want on our 10th Anniversary Soundtrack.

Our 10th Anniversary has been a special one and we enjoyed celebrating each and every one of you this month. But we didn’t want the fun to stop at surprise giveaways, lives streams and success stories. We wanted the celebration to live on, so every time you listen to the R.I.P.P.E.D. 10th Anniversary Soundtrack, you can feel amazing knowing that we are here because of your support, love and enthusiasm.

We are so very proud 0f our entire team and extremely grateful for making this dream come true! – Terry Shorter, Fearless Founder of R.I.P.P.E.D.

We carefully selected ten #RIPPEDFamily favorites to create this family-friendly soundtrack. If you hear any familiar voices throughout the soundtrack, that’s R.I.P.P.E.D. founders Terry and Tina Shorter providing some melodic motivation for your ears. Their daughter Tawnie Shorter is also featured on the soundtrack in the song Lucky. Prepare to be blown away by this awesome duet between her and her dad! 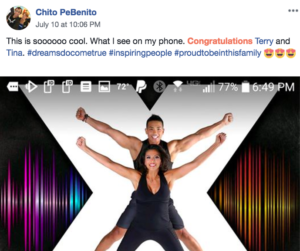 Put Yo Hands up 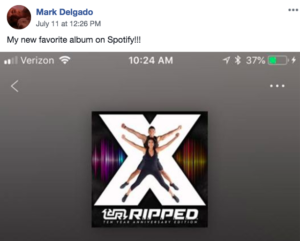 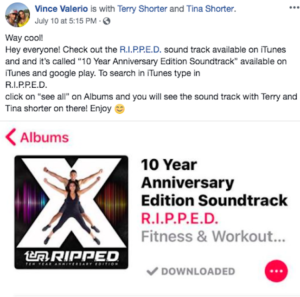 The response so far to the Anniversary soundtrack has been out of this world and makes it more than worth it.

Your new favorite soundtrack is now available for purchase on iTunes and Google Play, and for streaming on Spotify, Amazon Music and other music streaming services.

Tell us when you get your copy; we want to know which songs are your fave! Also, we want to see you getting down to the soundtrack. Post videos of your class, car jam sessions and more using the hashtag #RIPPEDturns10 on Facebook and Instagram and we’ll feature you on our social media pages. Go on, don’t be shy—we want to see you rock out to R.I.P.P.E.D.

Get up close and personal with R.I.P.P.E.D. through the eyes of these 10 fabulous fitness professionals.