Raise your hand if breakfast is your favorite meal of the day.  Go on, raise them in the air like you just don’t care.  Okay, that’s enough.  Time to get into the kitchen to make French Toast!  Just because you’re watching your waistline doesn’t mean you you must kick your favorite foods to the curb.  You’ve simply got to make them over, and maybe even throw a Martha (as in, Stewart) twist on them.  Below you will find a mouthwatering recipe for balanced French Toast, along with a snapshot of a cute plating idea from Martha Stewart.  Sometimes it’s all about presentation, and to me, everything looks cuter on a stick, even French Toast.

Combine all ingredients except bread and syrup in shallow dish. Lay bread in mixture to soak. Let it sit at least 5 minutes since the bread is denser than traditional bread and it’s harder to get the eggs to soak in.

Cook in skillet with fat free cooking spray. Once the bread is placed in the pan, pour any remaining egg mixture (the part that wasn’t soaked up) over the top of the bread so that you don’t miss out on any additional egg white protein. Cook 2 minutes per side and top with syrup, or try making your own berry drizzle by reducing some frozen raspberries with Stevia until a glaze is made.
Serves 1-Calories: 199 Fat: 6g, Carbs 22g, Protein 20g 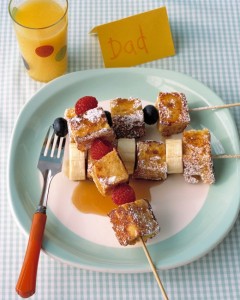 To serve, simply cube and skewer 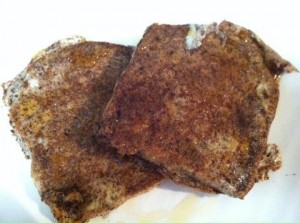