Did the title get your attention?  I hope so because I’m pretty happy with this little gem of a recipe.  I’ve been spending about $7-8 per loaf of Paleo Bread for the last year.  I don’t do this because I love it; as a matter of fact, it’s quite dry and cardboard-like, but I suck it up because it’s only 35 calories per slice with hardly any fat or carbs, and a girl needs a vehicle for almond butter.  I decided to take a stab at creating my own (there are only about 5 ingredients on the Paleo Bread label) and to my surprise, it was easy, quick, healthy and moist, not to mention, much cheaper than what I pay at the store.  My idea was to create a bun that would hold up as an egg sandwich, or taste good with light cream cheese, or nut butter.  At the last minute, something told me to use pumpkin, making the bread slightly sweet.  I decided to use cashew butter on one side and my egg on the other.  Then…I got an even better idea!  Whoopie Pie!  You could fill the middle with just about any healthy sweet topping you like (low-fat pumpkin cream cheese, some Greek yogurt, canned pumpkin with cinnamon and ZSweet sprinkled on top) or do what I did and make a filling out of protein powder, stevia, cinnamon, pumpkin and a little almond milk.  Enjoy this light and tasty little treat, and let your mind go wild over different flavor combinations.  Scroll down to see all the ways I used them today. 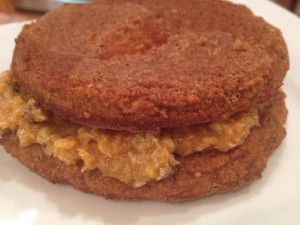 2 medium egg whites (or one large)

Preheat oven to 375. Combine first four ingredients and stir well.  Stir in eggs and pumpkin and stir rapidly to get rid of any clumps. Add remaining ingredients.  Batter should be clump-free and thick like biscuit dough.  Form two equal circles on a Pam-sprayed silpat or parchment paper.  Bake for 12-14 minutes.  Should be cooked through and firm but not dried out.  Remove and cool before filling.

1/2 tablespoon Z Sweet (or other no calorie sweetener)

Stir together all ingredients to make a paste-like filling.  Smear, add the two sides together, and enjoy a guilt-free, gluten-free treat. 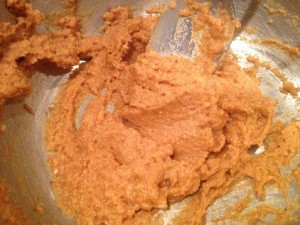 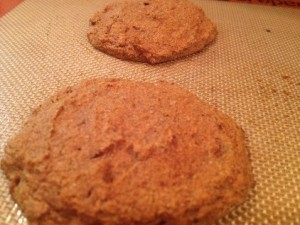 Hot Buns Out of Oven 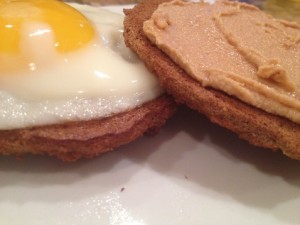 Options: Cashew Butter or as Toast for Eggs 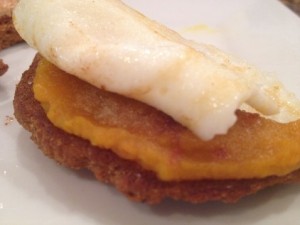 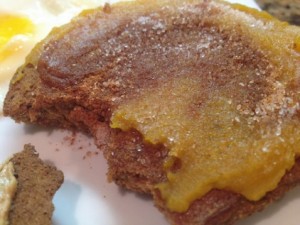