Okay, you caught me.  I actually bought an unhealthy brand of supermarket peanut butter.  I couldn’t resist.  The “whipped” label caught my eye.  I’ve never met a nut butter I didn’t like, so I was pretty sure the fluffy cloud-like gimmick would rock my world just like every other nut I’ve ever tried.  I was also intrigued that because of the light and airy consistency, I’d be saving on fat and calories, according to the little rectangle container.  Taste-wise, it was pretty good.  I’ve gotten so used to all-natural peanut butter with no other ingredients, that, quite frankly, it tasted a little fake.  But the airiness was pretty cool, I must admit.  I imagined a light little spoonful atop my kid’s waffles just like restaurants use with regular butter.  But it got me thinking…how could I do this myself, and would it taste more real?  I bought a bunch of nuts from the bulk bins and got to work.  I decided I’d try some flavored nut butters since I was in charge.  My first batch was a blend of unsalted, dry-roasted almonds and unsalted, dry-roasted peanuts.  I wanted to created a fluffy version, and wanted it to have a cocoa flavor, so I added a touch of Stevia (2 concentrated spoonfuls) and Coco Complete, which is a chocolate flavored antioxidant.  Alternatively, you could just use cocoa powder with more Stevia or some honey.  My second batch was a blend of unsalted cashews and peanuts.  I wanted a cinnamon-vanilla flavor, so I added both. After you taste these and imagine all the flavor possibilities, you’ll never buy store-bought again. 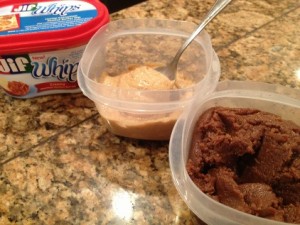 2-3 spoons of concentrated Stevia, or use liquid Stevia 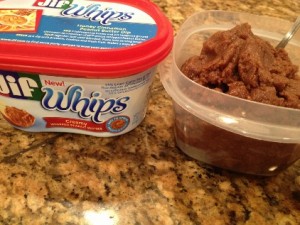 Blend nuts in a food processor for 10 minutes.  Don’t be alarmed if it clumps up, it will eventually smooth out, I promise. Add cocoa, stevia and vanilla and blend.  Slowly add milk a little at a time while processor is on.  Add more by the tablespoon, if needed.  Blend another 2-3 minutes.  Mixture should be nice and fluffy (not nearly as airy as the store-bought, but nice, nevertheless).  Store in a sealed container in the fridge.

Blend nuts in a food processor for a few minutes.  Cashews blend up faster than other nuts.  Add cinnamon, stevia and vanilla and blend another minute.  Store in a sealed container in the fridge.

Chicken on the Run

The “Other White Meat” Dinner for the Family

Not Your Momma’s Meatloaf